UNICEF's Angus Ingham shares the inspiration thru the execution of UNICEF's effective installation that put the spotlight on the tragedy of children killed in conflict zones.

Angus Ingham - OIC Head of Special Projects, Partnerships and Events for UNICEF spent some time with AME’s Effective Perspective to share the inspiration behind UNICEF’s Platinum winning installation that brought global attention to children killed in conflict zones.The brave campaign garnered more than 400 media articles and broadcasts globally and over 300,000 engagements on social media and reached a combined audience of over 1.1 billion without any media spend.

AME Awards: What was the inspiration for “Backpack Graveyard” and what did you ultimately hope to accomplish?

Angus Ingham: According to the 2019 Annual Report of the Secretary-General on children and armed conflict, more than 12,000 children were killed or maimed in conflict zones in 2018 – the highest number since the United Nations started monitoring and reporting this grave violation. These are only verified incidents – the numbers are likely to be much higher. UNICEF reported that nearly a third of these children lost their lives; 3,758 senseless deaths.

In a context where shocking statistics don’t generate much shock anymore, how could we bring global attention to the senselessness of children’s death and leave an impact on world leaders?

The idea was to bring the statistic of 3,758 children killed in conflict zones in 2018 to the fore at one of the prime meeting spots for world leaders, the United Nations General Assembly, guaranteeing visibility and accuracy in targeting our audience and hoping to advocate for peace and the protection of children, at the very highest of levels. 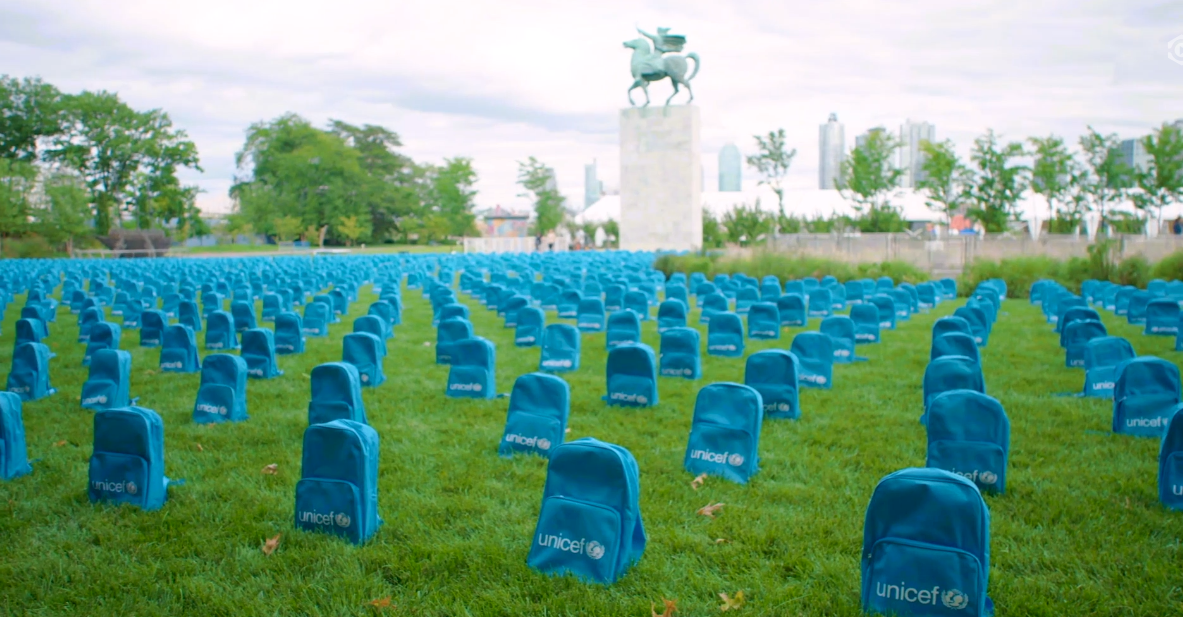 Angus Ingham: The inspiration came from the very top, our Executive Director Henrietta H. Fore, whom initially challenged us to find a bold & innovative way to garner attention to Child Rights issues around Education, Safety and Protection.

The period from ideation to execution was incredibly fast, turning it all around in just under three weeks. The idea for where to do this came first – the North Lawn of the UN. The how – the eureka moment- was an idea conceived by visualising one of UNICEF’s most iconic items of hope – the backpack - symbolically representing rows of tombstones similar to that in mass burial sites such as Arlington Cemetery. Simply by sitting in a room with the backpack physically in hand and imagining what this could represent led to the bold idea of creating a powerful statement.

We then did a very quick series of tests for how this may work and look and even mocked it up to take it back to senior UN & UNICEF officials for approval of the concept.

A very small team with an even smaller budget to work with (logistical hard costs only) mobilized to bring it to life at breakneck speed, taking care of multiple facets simultaneously such as approvals, logistics, media messaging, volunteer management and set up plus pack down, troubleshooting, timelines and capturing the display in situ.

Phase 1 – The Backpack Graveyard (Sept 8 - 15): We laid out the 3,758 backpacks, forming the backpack graveyard. Global media outlets covered the installation, and UNICEF issued a press release about the display and report findings. 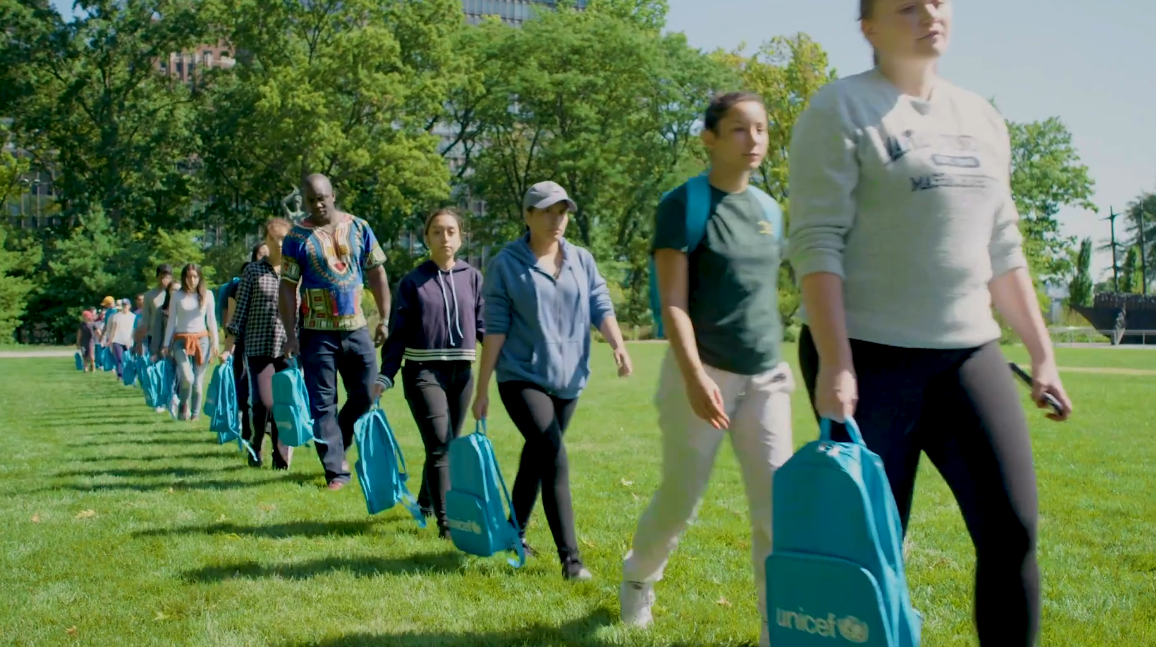 The UN Secretary General responded by visiting the installation, writing to UN Ambassadors to do the same and spread the message, and asked for the display to be extended by three days. 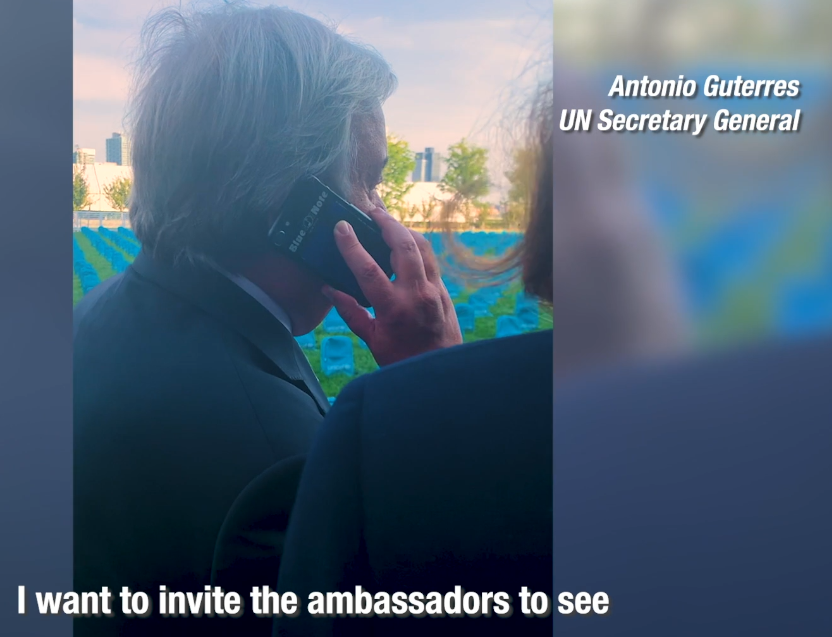 Phase 2 - Message of hope (Sept 15): Most backpacks were removed leaving a few to spell “HOPE” and remind the world that the graveyard scene can and should be replaced by peace and hope for all children.

Phase 3 – Advocacy and support (Sept 17 – Present): The backpacks were sent to Latin America to support children facing violence and issues in accessing education. Some were also sent to dignitaries as an ongoing advocacy symbol and reminder of the cost of conflict.

AME Awards: Please share any creative and logistical challenges you faced throughout the campaign and how you solved them.

Angus Ingham:The first was striking the right balance of boldness and tone. We were representing children who needlessly lost their lives so respecting this the entire way through the process was a top priority.

We did not have an agency or production company so I took on the logistical challenges of execution which included the following (plus more):

How could the bags sit up in formation without being knocked down by wind and other elements?
Solution: After varying ideas and tests, a small cinder block that fit neatly into the bottom of the bag would have enough weight and center of gravity to keep the backpacks upright and in place.

The grass of the North Lawn of the UN would need to remain intact and we risked the grass underneath the backpacks dying.
Solution: Quick tests revealed that the grass could be kept alive if the backpacks were removed before 8-9 days and by gently massaging the grass back up it would regenerate back to complete health in just a few days.

Sustainability. UNICEF and the UN are very conscious of the use of unsustainable materials and our own impact on the environment.
Solution: All materials used in the installation ere able to be reused and repurposed thereafter – from the cinder blocks to the backpacks themselves which continued on to their usual use in UNICEF programmes to equip children with educational materials and access.

Preparing and then laying out nearly 4000 backpacks by the hands of volunteers in a very limited time period was a huge challenge.
Solution: We utilized the help of a local surveyor company to help digitally map how we could plot the backpacks across the lawn. We also developed a set of groups and stations for volunteers to assemble and ready the bags followed by placing them out across the lawn. This took around 8 hours. The next 8 hours that followed were aligning the backpacks using string line and trigonometry, gong row by row, bag by bag to do so. We worked from pre-sunrise to post-sunset and had the last bag placed some 16 hours after starting. It was worth it, as we had a photographer shoot the display at sunrise the next morning, followed by world press covering the display and the following day (Monday) the high level meetings began at the UN and the response to the display was overwhelming. 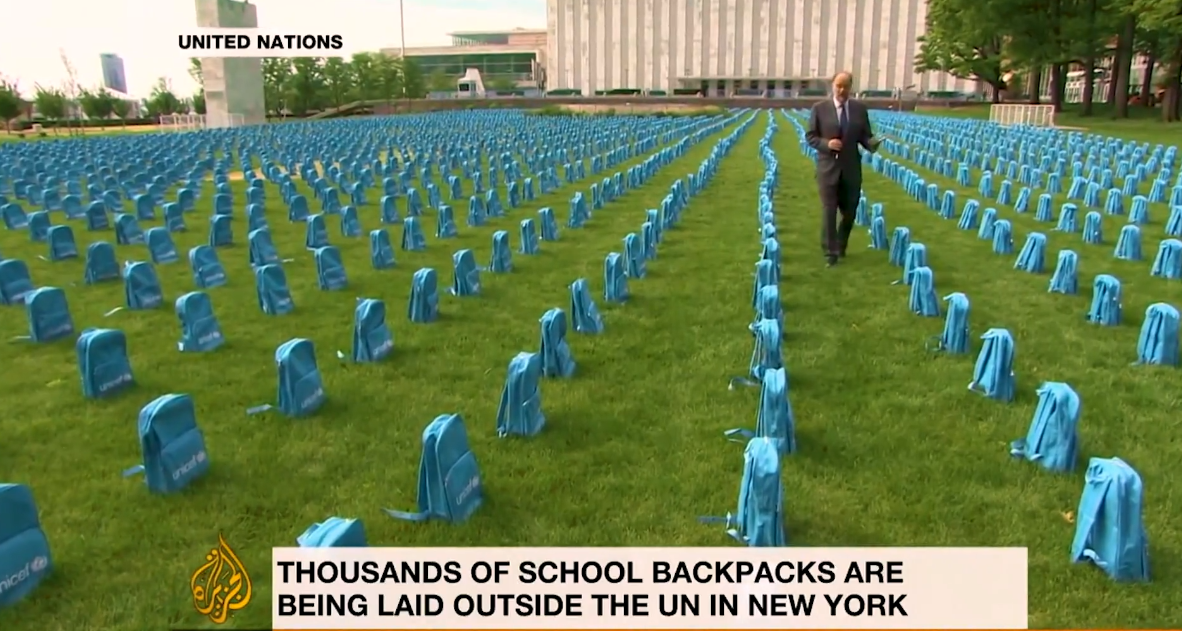 AME Awards: The brilliant success of “Backpack Graveyard” was recognized by the 2020 AME Grand Jury, please share some of the strategic elements that led to the campaign’s success.

Angus Ingham: We laid out 3,758 iconic UNICEF blue backpacks, one for every child robbed of their chance to learn, and to live – creating a backpack graveyard on the North Lawn of the United Nations.

Using an item usually symbolic of children thriving and able to attend school, we plotted each backpack carefully like a tombstone in a child-sized version of military graveyards.

The sheer power of the idea coupled with where we placed it, at the most opportune time to capture key decision makers and world leaders gave the initiative a strategic edge to capturing the wider public’s attention to a very worthwhile cause.

AME Awards: What was the reaction internally at UNICEF to the results of the campaign? What results were you most proud of and why?

Angus Ingham: Praise poured in from the whole world of UNICEF and our sister UN agencies – with offices in over 191 countries and territories – after seeing the display and the media pick up on traditional and social media platforms all around the world. Importantly, beyond the praise was a resounding sense of pride and emotion for the work we do and change we strive for in the world. 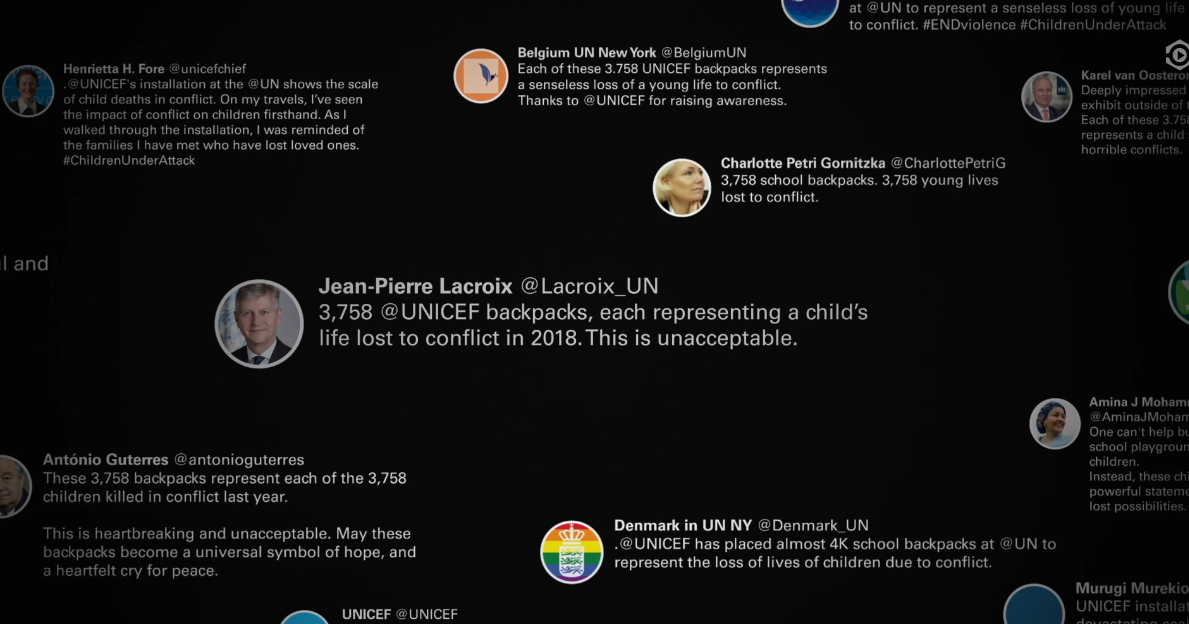 The numbers it garnered with completely organic reach of over 1.1 billion and well over 400 media articles in just a number of weeks was one thing, but the results I was most proud of was attracting the attention of the UN Secretary General who took time out to come down and walk through the display. Upon seeing it, he invited all Ambassadors to the UN to come and do the same. He then delivered several keynote addresses to the United Nations General Assembly, Security Council and other subsequent meetings months later (even into the present year) where he specifically referenced the Backpack Graveyard as a reminder of the cost of conflict and war and the importance of peace. 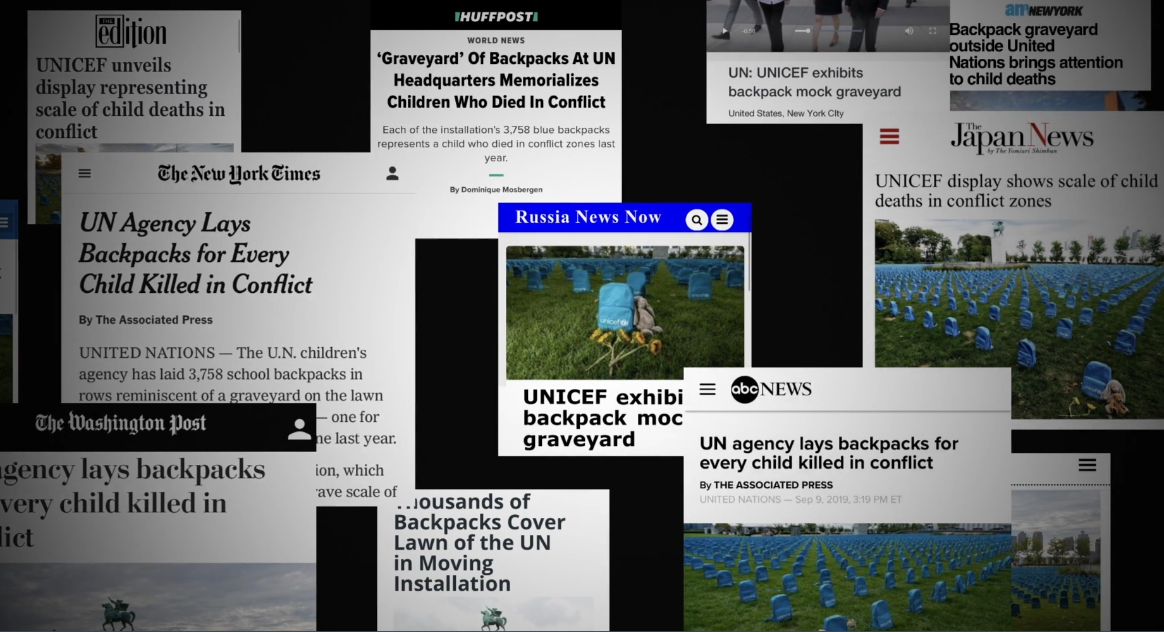 AME Awards: “Backpack Graveyard” was honored with the AME Regional Platinum Award – North America and the AME Gold Award and now being mentioned on the AME Report (both Agency and Brand), what does this accomplishment mean to you and the UNICEF team?

Angus Ingham: An idea alone is just that.

It takes a great Brand, an entire village and a relentless spirit of getting things done to make it a reality and that is where I am the most proud of UNICEF’s efforts behind this internally conceived & executed idea that sought to garner global attention on the grave cost of conflict on the lives of children all over the world.

We are thrilled to be recognized by the prestigious New York Festivals AME Awards and are so grateful that the Backpack Graveyard idea has had the strength and boldness to continue to gain recognition on a global scale in order to highlight the important work we do across the world, day in, day out in over 190 countries & territories - and importantly, the reason why we do it.

For every child, a future. 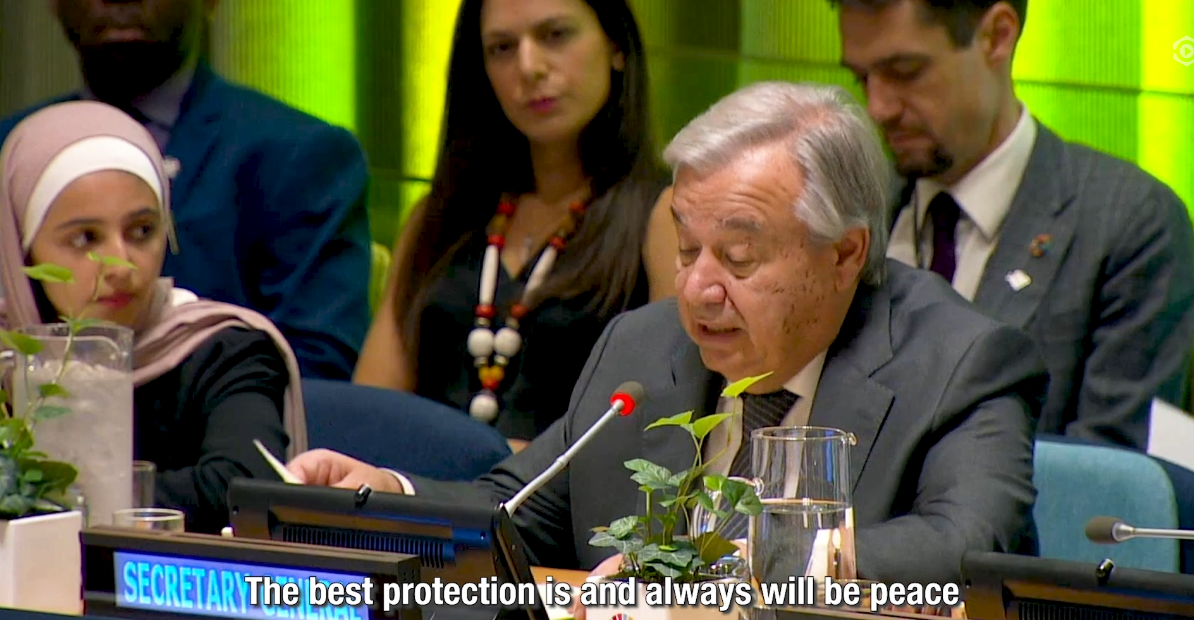 AME Awards: What is next for UNICEF?

Angus Ingham: It is 2020 and it goes without saying we are living in unprecedented times.
This pandemic we are tackling is, perhaps, the first truly global crisis in our history, but our history of responding to crises proves that we can do anything when we pull together. We know how to help children recover. UNICEF can be trusted to get things done.
Over the coming months through the newly launched Reimagine campaign, UNICEF will ask partners, governments, private sector, influencers and the public to raise funds so that UNICEF can both respond to the crisis and help children recover, as well as urging the global community to reimagine a better world for children post COVID-19.

Together, we can prevent the COVID-19 pandemic from becoming a lasting crisis for children, especially the most vulnerable. We must take this opportunity to invest in their futures and build back better and greener.

The creative industry can help us immensely. We have some very special initiatives coming up in support of this, so please follow & support UNICEF and look out for some incredible acts of love and solidarity to come, for every child.

Find out more at www.unicef.org/reimagine

UNICEF works in some of the world’s toughest places, to reach the world’s most disadvantaged children. Across more than 190 countries and territories, we work for every child, everywhere, to build a better world for everyone.

For more information about UNICEF and its work for children visit www.unicef.org.