Baggio Song, Chief Strategy Officer at Inspire Communications Group and Georg Warga Creative Director / Filmmaker / Founder at GOODSTEIN share their strategic and creative insights behind “Do Your Own Stunts” for Volkswagen with AME’s Effective Perspective.

Inspire Communications Group and Goodstein’s social media-led activation campaign engaged consumers to drive sales and promote test drives for the Volkswagen Touareg in China. The personalized immersive campaign featured Chinese action film star Wu Jing. A custom-made feature within the Vlog platform VUE invited the consumer to replace the test driver in the online film with their own selfie videos right next to Wu Jing. The results went viral on Douyin, the TikTok of China and were used as a recruitment tool for a nationwide test drive event where drivers could do their own stunts, this time for real.

Powerful Results: When the total China auto market declined by 7% and C-SUV segment declined by 8% in 2019, VW Touareg went against the tide and outperformed the whole market by a landslide.During the two-month campaign period (Nov.&Dec.2019), sales of VW Touareg increased by 160% compared to the same period in 2018 contributing to an overall nearly 50% annual sales growth in 2019. ’Do your own stunts’ delivered the highest sales figures in the history of the Volkswagen Touareg in China, to date. Social Media: On VUE 8,337 UGC videos 600,000 views On Douyin 20,590,000 views 600,000 engagement.

Baggio Song, Chief Strategy Officer at Inspire Communications Group and Georg Warga, Creative Director/Filmmaker/Founder at GOODSTEIN share their strategic and creative insights behind their Silver AME Award-winning “Do Your Own Stunts” Volkswagen with AME’s Effective Perspective. 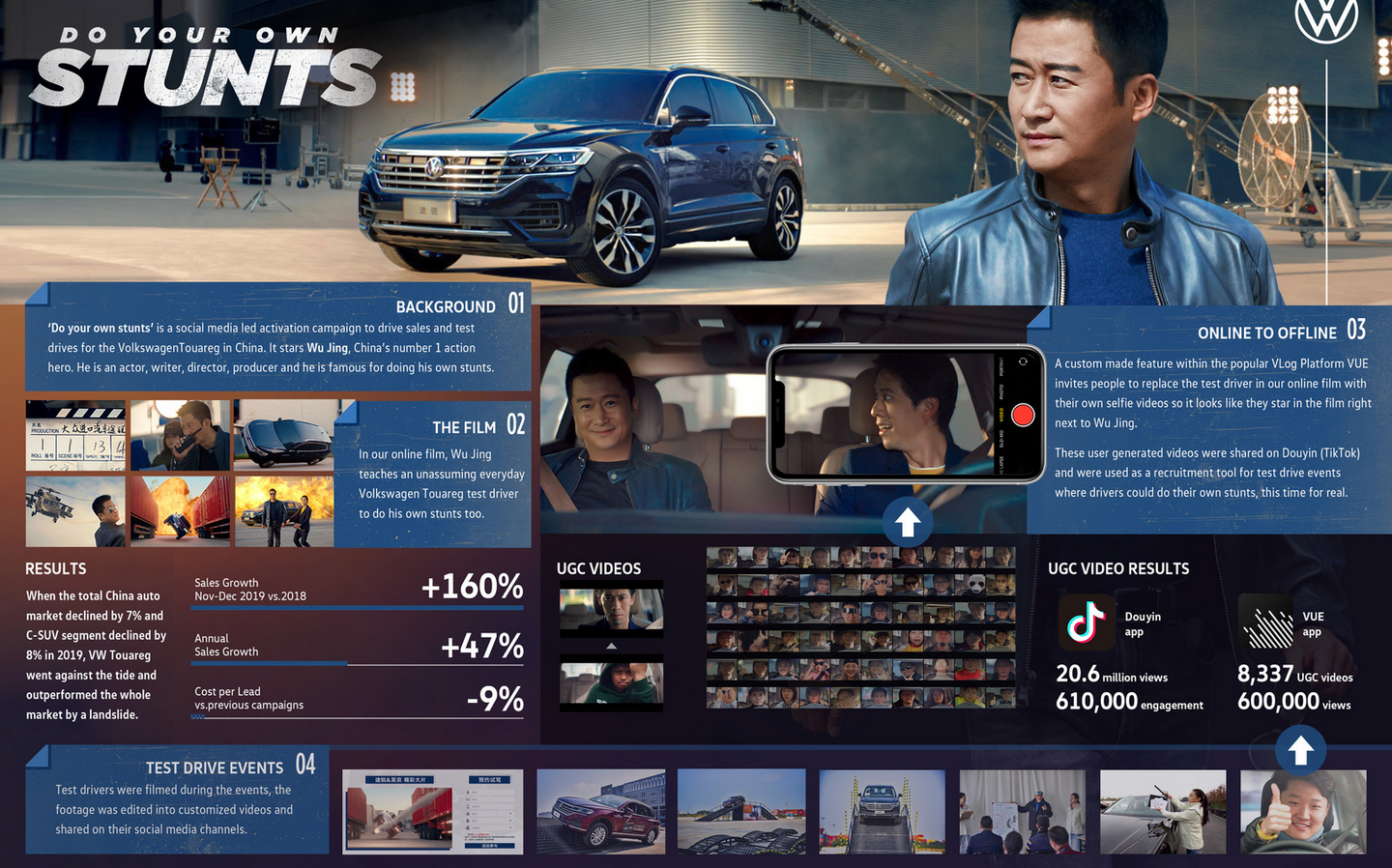 AME Awards: What was the inspiration for “Do Your Own Stunts”” and what did you ultimately hope to accomplish?

Baggio Song: 2019 was not an easy year for automotive brands in China market. We needed to generate more leads for test drives and ultimately drive sales for the Volkswagen Touareg in China. As Wu Jing signed on as the Touareg brand ambassador in 2019 we needed to leverage his star power on social media.

Georg Warga: Wu Jing is China’s number 1 action hero. He is an actor, writer, director, producer and he is famous for doing his own stunts. For Volkswagen we needed to be more inclusive, after all, the brand in China is known as ‘The People’s Car’. We wanted to say that with the Volkswagen Touareg you can do your one stunt too.

AME Awards: Was Volkswagen on board immediately with the concept you pitched and how did you sign national treasure, Chinese action-star Wu Jing to perform in the campaign?

Georg Warga: It took several rounds with some interesting angles, but the chosen concept resonated with Volkswagen and Wu Jing alike. Wu Jing promotes his own brand as a filmmaker, he says: ’that’s Wu Jing style’ and if it isn’t, he wouldn’t participate.

Baggio Song: Volkswagen understood that they would need something very out-of-the-box to outperform the market. So, they liked the idea when say saw it because of its adaptability and potential in social media activation.

Baggio Song: As a lead agency we needed to control the quality on each touch point as the campaign was an online to offline activation. If a driving event as an example does not mirror the idea, the story is incomplete. A lot of effort went into creating a toolbox that allowed for other participating agencies to easily adapt the concept for the roll out.

AME Awards: Share any creative and logistical challenges you faced throughout the campaign and how you solved them.

Georg Warga: At the end everybody looks at results and that’s fine. But the real challenge from a production perspective in how to deal with a superstar in an impossible time frame. We only had a single shooting day for both film and photo assets which meant the whole production really had to work as a clockwork.

AME Awards: From the production company’s point of view what elements were instrumental in this campaign being so successful?

Georg Warga: We had to shoot the main activation film as a template that would allow for people to exchange shots through the popular vlog platform VUE so it looks like people would drive.the car next to Wu Jing. So instead of a linear film story we wanted the people’s versions of the film an essential part of the campaign.

AME Awards: The success of your social media-led activation campaign ““Do Your Own Stunts” was impressive, share the strategy that led to success.

Baggio Song: The Touareg target audience in China is a lot younger than in the rest of the world. It makes more sense to activate them in their social media as they are technology savvy and more eager to participate if it’s fun. In China social media is overloaded with all kinds of content. We need to make the content more personal and ‘sharable’ which generates social currency, instead just copy and paste the brand official content.

Baggio Song: Even before Covid the total China auto market declined especially in the SUV segment. VW Touareg went against the tide and outperformed the whole market by a landslide. ’Do your own stunts’ delivered the highest sales figures in the history of the Volkswagen Touareg in China, to date.