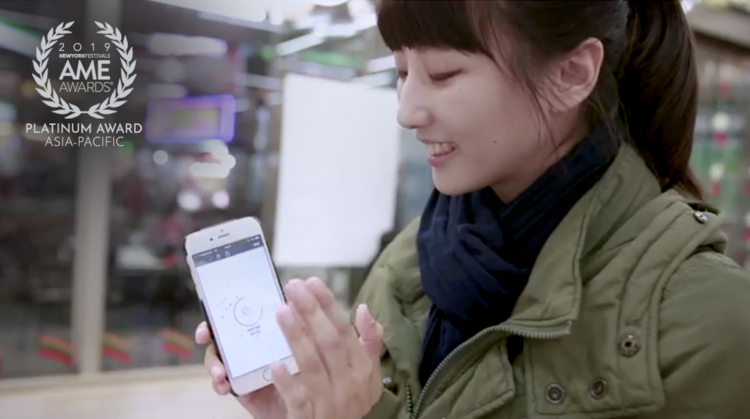 ADK Taiwan’s “Rhythm of Love Wall” earned the AME Regional Platinum Award-Asia Pacific for 7-ELEVEN Taiwan. An interactive installation with 12 pairs of realistic hands capable of creating 200,000 continuous rhythms to applaud donations encouraged consumer to donate spare change. Donations were also collected via the mobile website, with user-generated content transmitted back to the installation and heard in store.

Results: Donations raised were up 200%, resulting in a record-breaking high and $9,680,000 in media impressions.

"We are thrilled to know that Rhythm of Love Wall earned AME Regional Platinum Award, it's obviously an exciting surprise to the ADK team and 7-ELEVEN CSR. We have been trying to figure out a non-traditional way which can break down the cultural and language barrier to make more people realize that "do not think any virtue trivial, and so neglect it.”  So even if only donating a coin, it will help people and deserves to be encouraged. Thanks to AME award's recognition, we couldn't be happier with this result and will keep working hard on doing more creative and effective things!"—Richard Yu / Regional Chief Creative Officer, ADK Greater China 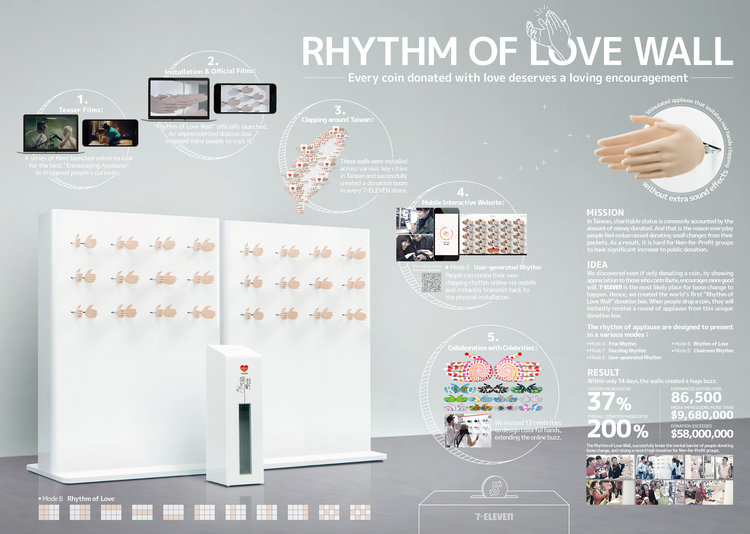 What was the inspiration for “Rhythm of Love Wall” and what did you ultimately hope to accomplish?

Richard Yu: We would like to tell people that even if you only donate a coin, all your goodwill and helpfulness deserves a respect! We would like to encourage these good deeds and make the donors feel helping people is truly a happy thing.

Ultimately we hope that everyone who has engaged this campaign knows that there's always a donation box for charity fundraising placed in every 7-ELEVEN store.

How did you convince 7-Eleven of the idea or were they on board immediately with the concept?

Richard Yu: Fortunately, our idea was adopted at the first time presentation, the client felt surprised to the solution and liked it very much.

﻿Who developed the robotic human’s hand used in the Wall and what sort of program was used to replicate the clapping sound of consumer’s self-created applause?

Richard Yu: ADK TAIWAN started to find the co-creation partner after the idea was adopted. The first choice is PARTY New York / Taipei, a fantastic and innovate creative lab which owns the brilliant creativity and professional skills with the related execution. It's grateful that PARTY was interested in our idea. In order to satisfy our expectation, they further invited BYE BYE WORLD from Tokyo to cooperate to develop the robotic hand device.

We want to enhance the engagement on both online and off-line, and linked the physical installation to social media well. Therefore, we would like to create a chance, making consumers to participate the campaign on their own initiative. Qanta Shimizu, Tech Director of Party New York, took charge of this self-created applause program, making the clapping fun and variety. Meanwhile, it allows people to give the donation online.

Richard Yu: During the whole co-creation process, the most interesting part was we had hundreds of meetings which had turned night into day because of the time difference between NY and Taipei. Both Party and ADK took turns to pull all-nighters for meetings. It’s hard but everyone was very motivated and satisfied. In addition, Party flied to Taipei for confirming some key phases in person, discussing lots of important decisions together.

In addition, the whole execution period took more time than usual projects because of the cross-border collaboration. Theefore, in order to get enough time for the donation installation impeccably aired, we had produced a series of teaser films and launched a social media event, brewing a trend topic and spread the related information to trigger the consumer to keep their eyes open for the campaign.

“Rhythm of Love Wall” donations raised were up 200%, resulting in a record-breaking high and with $9,680,000 in media impressions What results were you most proud of and why

Richard Yu: In addition to the increase of the donation and the earned media, Rhythm of Love Wall has continuously gained lots of recognition all over the world, at the same time we also received the invitation from the oversea charity foundations or corporations and exhibitions etc. They expressed their strong interests to this idea and would like to invite the installation to exhibit in their markets/countries.

The influence has surpassed our original expectation, it successfully makes more oversea markets/people know that 7-ELEVEN Taiwan has this innovate and entertaining donation installation and utilized it to make great contribution to the charity, it’s absolutely an exciting and inspiring experience to the team.

What was 7-Eleven’s reaction to the results of the campaign?

Richard Yu: 7-ELEVEN has been fundraising for charity for many years. However, they are very surprised with this idea, the execution as well as the results of the campaign this time.

“It’s amazing that we could raise a record high donation just by clapping hands!” said by Lily Lin, PR Minister of 7-ELEVEN Taiwan.

In addition to doing a good job in corporate social responsibility, the campaign also makes people understand that 7-ELEVEN is an innovative and caring brand. It’s very meaningful.

“Rhythm of Love Wall” AME Regional Platinum Award – Asia Pacific, what did this accomplishment mean to you, the team, and the client?

Richard Yu: The team gave their best efforts for this campaign for more than a half year, from the concept to the presentation, then the execution till the campaign official aired. Therefore, winning AME Regional Platinum Award – Asia Pacific, this prestigious and global benchmark award, this accomplishment is not only a surprise to the team, but also a real shot in our arms. It’s definitely correct and worthwhile to decide to involve in this idea without any hesitation. Everyone in the team is a real privilege to be a part of members who had contributed to this work.

What’ next for “Rhythm of Love Wall”?

Richard Yu: We want to invite everyone to continue giving their power for love in the next, please expect “The Force of Love” campaign.