The BVG Frauenticket (Women’s Ticket) is the world’s first women's transportation ticket created to highlight the 21% gender pay gap in Germany. The Women’s Ticket allowed Berlin women to travel for 21% less on Equal Pay Day, March 18th. By creating the Women’s Ticket, BVG was able to drive awareness around this inequality and set a strong example to other companies to mind the gap and guarantee equal pay for equal work. 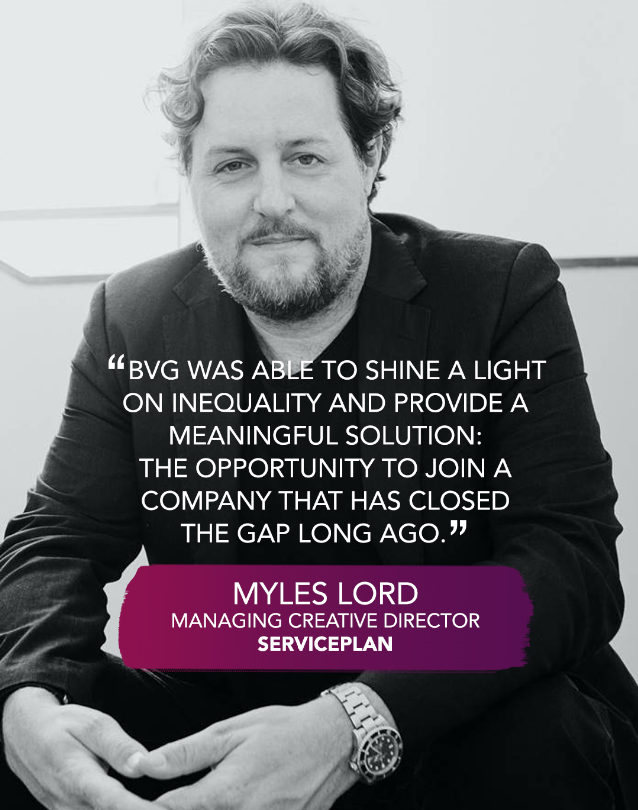 On March 18th, ‘Equal Pay Day,’ BVG brought the Women’s Ticket to 600+ ticket machines across Berlin and unveiled a special Women’s Ticket Machine inside the Alexanderplatz subway station in the center of the city. The iconic machine used gender recognition technology to identify women and offer a full range of 21% discounted tickets - including yearly tickets with savings of 160 euros. The Women’s Ticket payment receipt carried a targeted message: "Instead of paying 21% less - earn 21% more.” - encouraging women to apply for careers with guaranteed equal pay at careers.bvg.de.

The BVG Women's Ticket action brought ‘Equal Pay Day’ onto the evening news of every German broadcaster on March 18th and sparked a global discussion on gender equality and equal pay.

AME Awards: How did the “MIND THE GAP” campaign idea come about, what sparked the BVG Frauenticket (Women’s Ticket) initiative?

Myles Lord: BVG has always had trouble with the gender balance within the company and always looks for ways to attract and recruit women. The idea came to use the concept of equal pay because BVG is extremely strict on “equal pay for equal work”. And in Germany the gender pay gap is large and nobody was really talking about it.

AME Awards: Talk about the campaign goals and how the strategy was determined.

Myles Lord: BVG wanted to raise awareness of an important issue and take a stand for women’s rights. In Germany the gender pay gap is one of the worst in Europe – so we chose the annual “Equal Pay Day” to show the disparity – by making a special Women’s Ticket which was 21% less than the price of the usual day ticket. BVG was able to shine a light on inequality and provide a meaningful solution: the opportunity to join a company that has closed the gap long ago.

AME Awards: Did the BVG have any concerns about the objective and achieving their goal?

Myles Lord: Sure, this was quite a bold move that would place the brand right in the middle of a political discussion. BVG tracked online sentiment and watched carefully as the story unfolded. The sentiment was really positive and even among men we saw a very positive reaction. 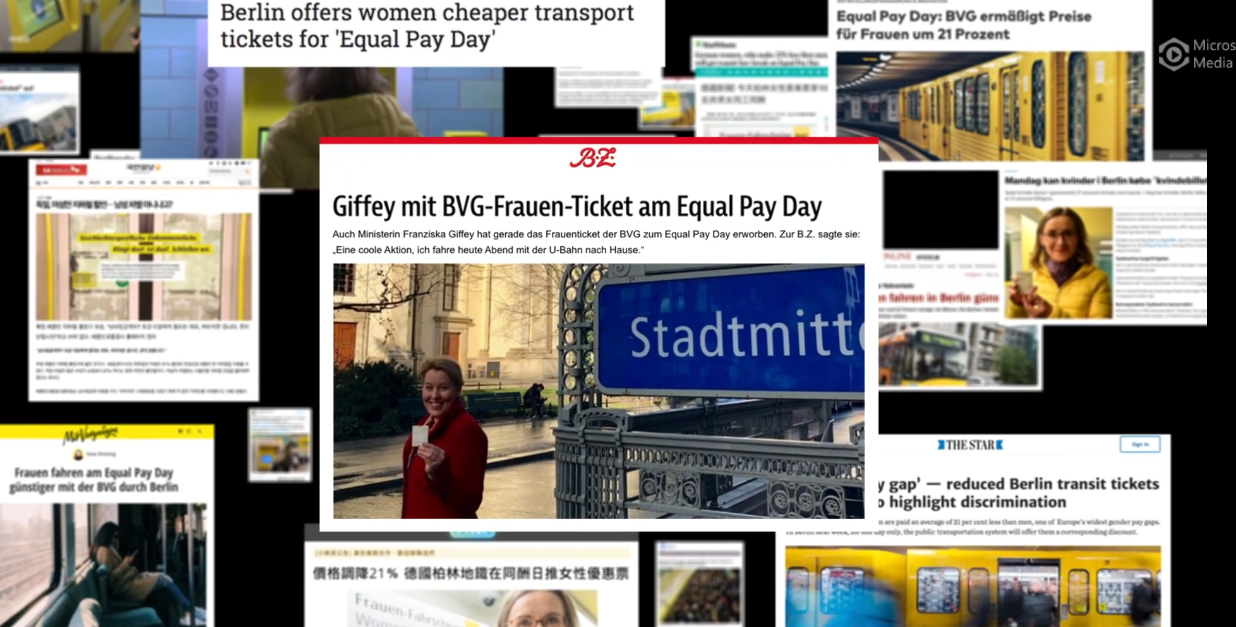 AME Awards: Share the timeline from inspiration to final execution of the campaign?

January 2019: BVG confirms the project and plans WOMEN’S TICKET to being issued on March 18th.

March 2019: One week before EQUAL PAY DAY we announce the WOMEN’S TICKET in Outdoor sites across the BVG Network along with print, social and radio.

AME Awards: What were the unique creative and or logistical challenges and how were they solved?

Myles Lord: The strangest, most unexpected thing we encountered was that the gender recognition system was better at identifying men than women. This is because the machine learning has been trained by men and most of the samples were male. So, we were concerned if there was any possibility that a woman would not be identified. This would have to be perfectly accurate or we would have a terrible situation. So, we decided the machine should look for men and not women – a man would then fail the test. This worked really well – thank heavens!

AME Awards: What results were you as creative strategists most thrilled about and which were key elements that ultimately led to the tremendous success of the campaign?

Myles Lord: Equal Pay Day and the German Gender Pay gap issue has traditionally received very little coverage in Germany. So, we were more thrilled about the WOMEN’S TICKET getting the Gender Pay Gap discussion onto every major German news platform on Equal Pay Day. We also saw that on March 18th search queries for 'Equal Pay' on Google.de increased by 1,900% compared to previous years. 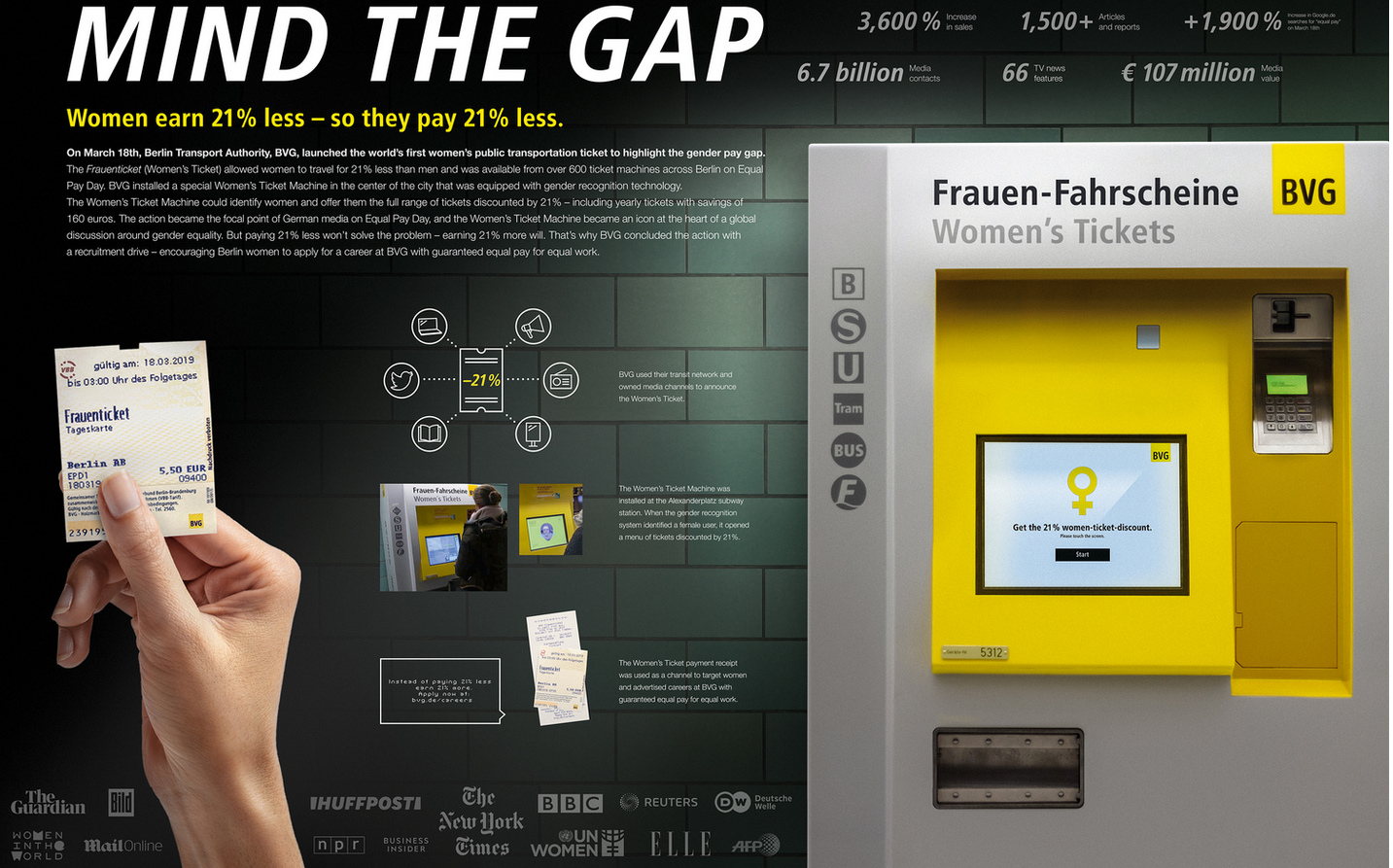 AME Awards: Did BVG’s stance to use their influence and power to stand up to Women’s Rights meet any opposition?

Myles Lord: A little. There was a tweet from the AFD: Germany’s far right party. And a few other haters. But BVG’s social team are razor sharp and notoriously witty. But not so much against.

A little. But not too much. You do however need opposition for a discussion. There were some haters on Twitter – but they were just cannon fodder for the razor sharp BVG social media team who are notoriously witty. Like when some guy tweeted “Women get to pay 21% less? That is unfair!” to which BVG replied: “think about that for a moment.”

AME Awards: How important was social media within the strategy mix?

Myles Lord: Very much. BVG is renowned for their amazing social channels which mix up apologies for delays and cancellations with really funny content with a typical Berlin sense of humor.

AME Awards: What was your client’s reaction to the increase in ticket sales on March 18th (‘Equal Pay Day’)? What results were you most proud of and why?

Myles Lord: I think the client was thrilled to see the amount of contacts and the fact that so many women chose to ride public transport to work and home again. It was almost like a march or a demo in some ways. Even the German Minister of Family Affairs Franziska Giffey used the WOMEN’S TICKET to get to and from the German Parliament on Equal Pay Day. For us, we were most proud of the local and global press reach with a media value of 107m Euro. 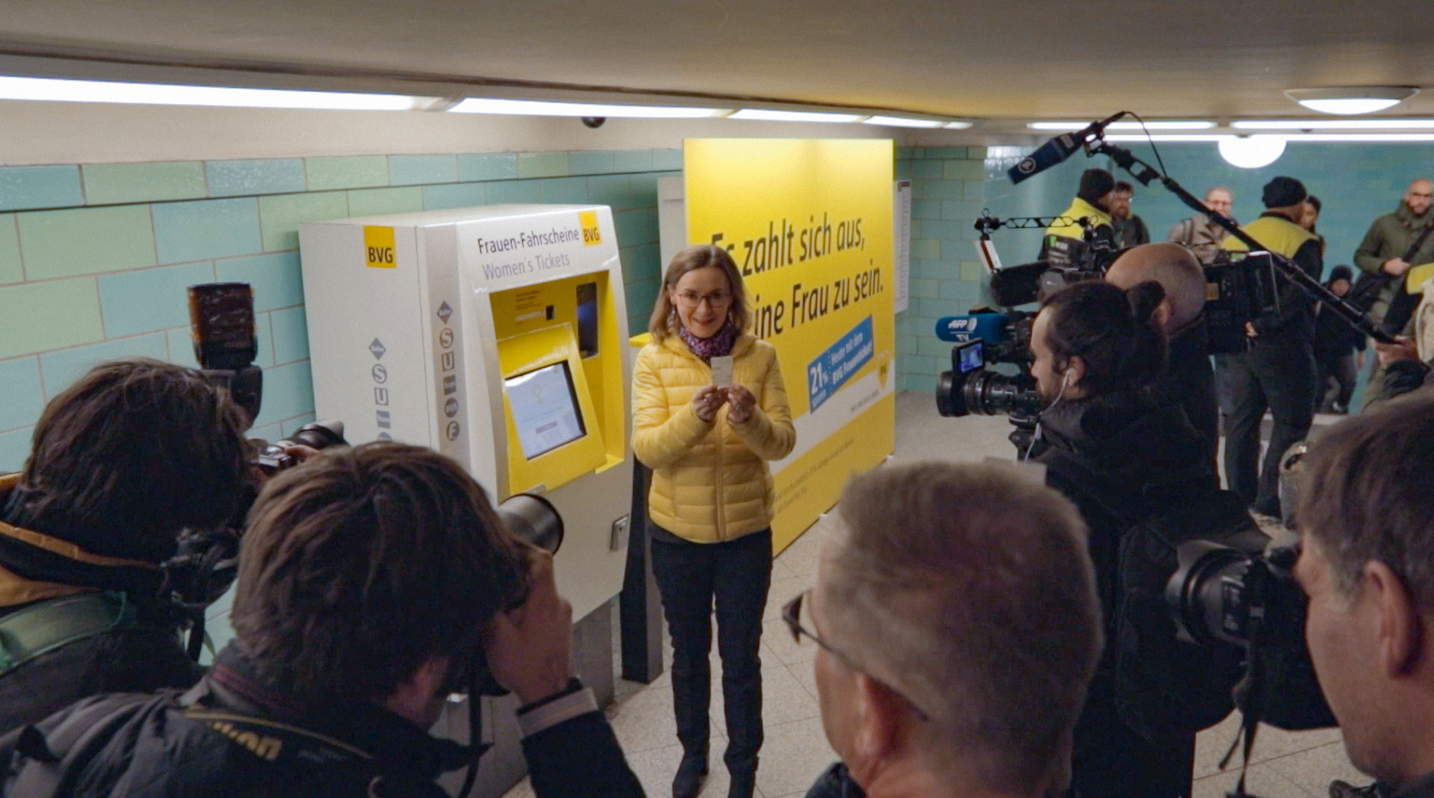 AME Awards: How does this initiative impact gender equality and equal pay within Germany?

Myles Lord: The action got people aware, thinking and talking. And BVG also stood as an example to other business to guarantee equal pay for equal work. And close the gap once and for all.

AME Awards: What is next is next for BVG, will they continue rallying for Equal Pay?

Myles Lord: BVG will continue to stand up for Berliners of all shapes and forms. We have many exciting new plans for the future, once we have conquered the challenges of the present. Watch this space.

AME Awards: “MIND THE GAP” earned 3 Silvers and 2 Bronze in the 2020 AME Awards, was one campaign that launched Serviceplan onto the AME Report (Agency) and BVG to the Brand Report? How important is this accomplishment to the agency and the brand? 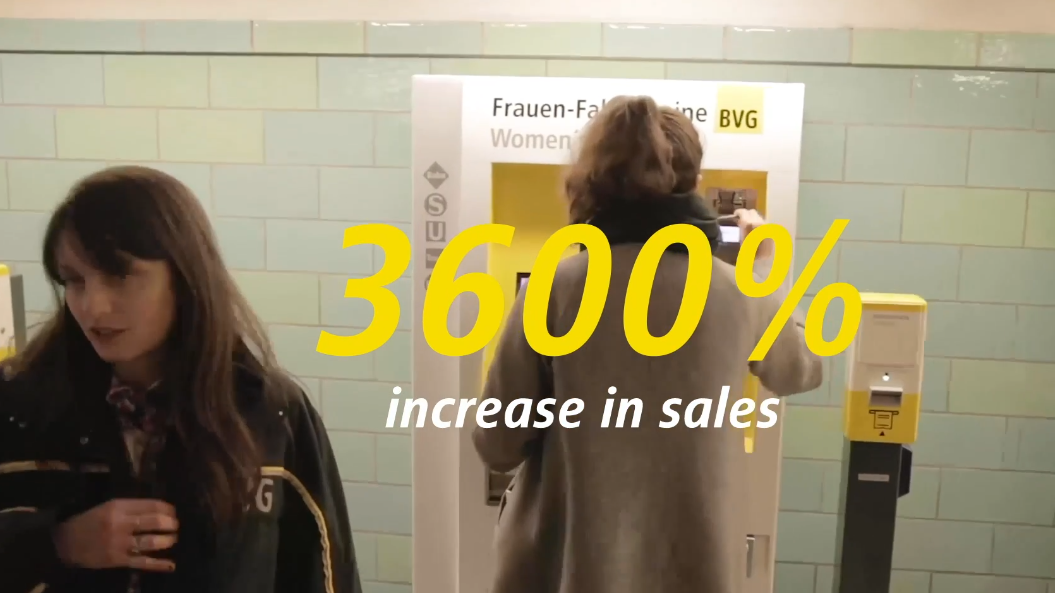