Mike Wilk, Global Creative Director for Serviceplan International spent some time with AME’s Effective Perspective to share the inspiration behind the agency's AME-Gold winning 360° integrated awareness campaign “LIFEBOAT – The Experiment” for client Sea-Watch. The idea was created with MIke Wilk in a team together with Maximilian Schöngen and Dennis Fritz.

Mike Wilk, Global Creative Director for Serviceplan International spent some time with AME’s Effective Perspective to share the inspiratation behind their super effective 360° integrated awareness campaign “LIFEBOAT – The Experiment” for Sea-Watch. The powerful AME Gold-winning entry was based on an idea created in a team together with Maximilian Schöngen and Dennis Fritz. 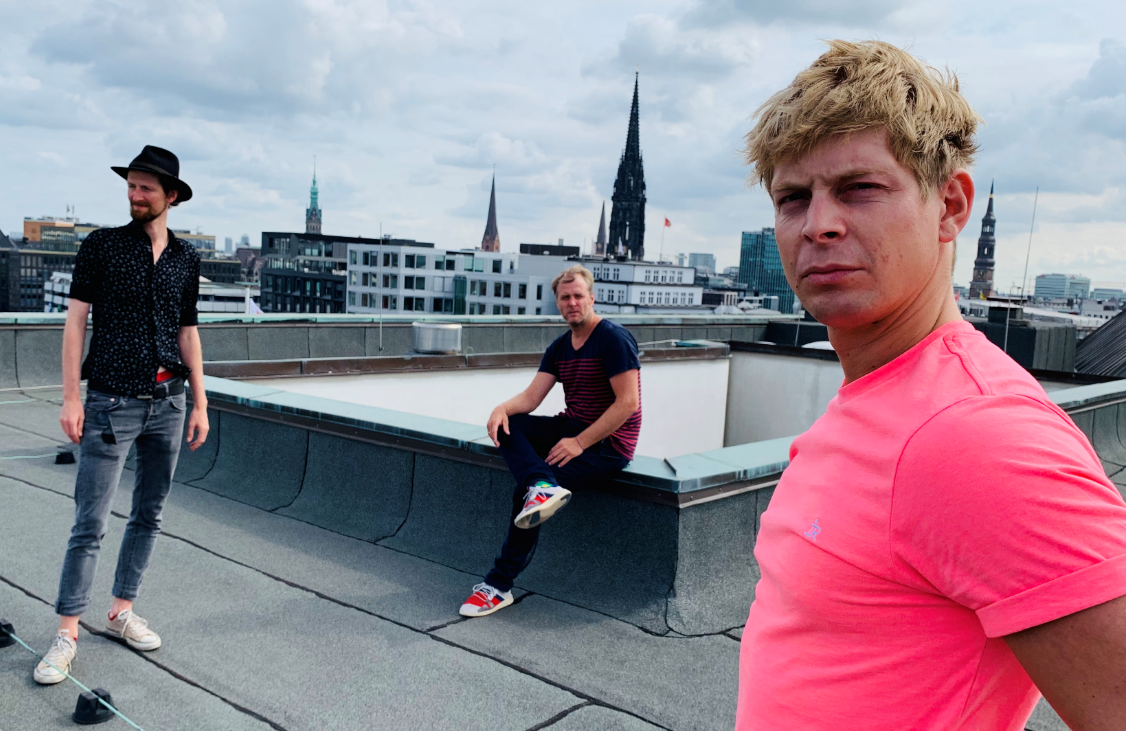 To regain awareness and media coverage for the refugee crisis on the Mediterranean and rescue organization Sea-watch, Serviceplan invited journalists from Germanys biggest newspapers and selected influencers to participate in one of a kind simulations. Participants were invited to experience a fragment of what it really takes to cross the Mediterranean.

Based on refugee’s experience, a simulation was created to generate a wide range of emotionally honest statements and show the different challenges the participants experienced. A wave pool at a maritime training center in northern Germany provided the setting for the diverse "cast" crew of the boats. All emotions and experiences were captured for a documentary short under extremely controlled circumstances by Oscar nominated director Skye Fitzgerald.

The documentary was hosted on a mobile, optimized website, which was distributed through all channels by selected opinion leaders and classic media. “LIFEBOAT - The Experiment” earned an AME Gold Award and brought about change and empathy for the refugee crisis for Sea-Watch.

Powerful Results: Pickup by all major German news-channels and international press from China to Canada and +1100 articles were published reaching half a billion people, tripling website traffic and increasing brand interaction by 310% all without spending a single euro in media. 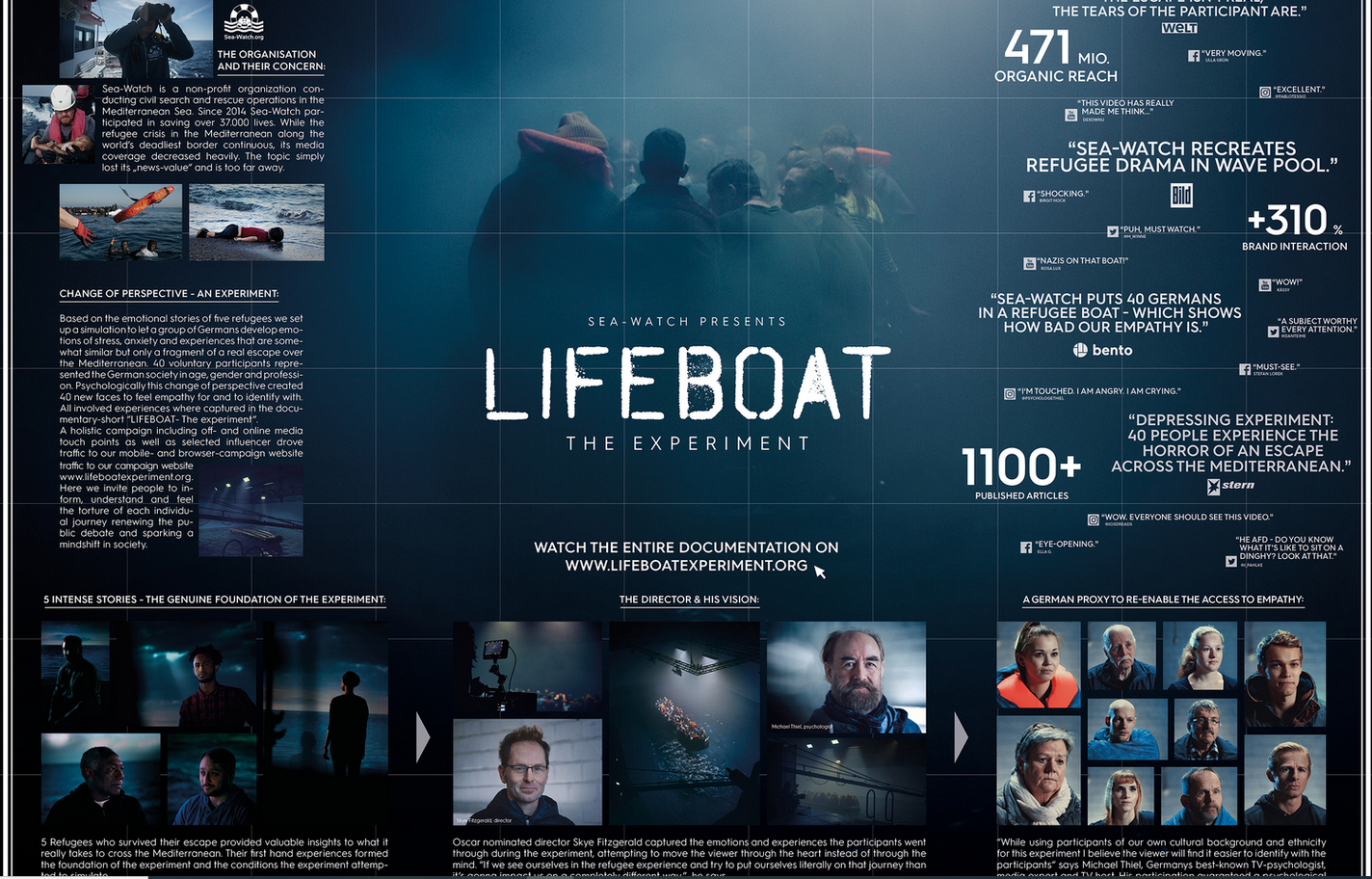 Serviceplan’s effective entries saw the agency attain the 4th slot in the AME Agency Report and their Gold AME winning “LifeBoat - The Experiment was one of the results-driven entries that brought the agency to the top of the report.

“Perfectly executed idea that brings home to influencers the experience of refugees and creates empathy for their plight. The clever part is that in just five hours, in a perfectly safe environment the participants were getting sense of how terrifying it can be in real life. Clever." Jamie Managing Director, Showpony Australia

Keep reading to find out more about this compelling project including the inspiration, insights, strategies, logistical challenges, and what results made the agency proud.

AME Awards: What was the inspiration for “LIFEBOAT - The Experiment” and what did you ultimately hope to accomplish?

Mike Wilk: I was visiting an indoor swimming pool with my family. They got an artificial wave-pool and I immediately could not get rid of this powerful visual to put a lifeboat into this setting. I was wondering if this would be possible, how to find participants and would this visual would trigger in public. We were hoping to find the right partners for the execution of our idea and that a finally executed case would cause as much attention as possible to the refugee crisis in the Mediterranean.

AME Awards: Was SeaWatch on board immediately with the concept you pitched?

Mike Wilk: Yes, with the concept they were quite fine from minute one. We initially pitched the name “REFUGEE REALITY” and it was one major feedback in the first discussions to change the title. Later on, we could convince Skye Fitzgerald to join our mission and he became the name-godfather with his Oscar-shortlisted documentation “LIFEBOAT”.

Mike Wilk: We knew upfront that we are talking about a huge project. The final realisation showed within the first discussions: our feeling was right. The safety-issues, the participants, health-regulation, setting up the entire location, the sound- and lightscape, the waves, etc… we were facing so many challenges. And the challenges were not over after the shooting. We got tones of high-resolution material, so the screening, the editing, and the postproduction was a challenge, too.

Finally, it was great the see reactions, interactions, and the overwhelming result of the campaign.

AME Awards: Please share any creative and logistical challenges you faced throughout the campaign and how you solved them.

Mike Wilk: The logistical challenges were really intense on this project. Finding the right location took us month since it was not only about the location but to secure a certain level of safety, too. We found the perfect spot, but it was away from any metropolitan area and kind of remotely up in northern Germany. The second biggest challenge: while our setup really paints a realistic picture of the circumstances onboard a lifeboat and trigger all the emotions from fear to insecurity and for example stress. Finally, we had one try for the entire thing: either it works or not. We prepped everything best possible, simulated every issue upfront and finally let go on the shooting day. So the combination of a proper setup, great pre-production and great planning helped us to overcome all those given challenges.

AME Awards: The success of “LIFEBOAT - The Experiment” was impressive, the campaign emphasized that the ongoing refugee crisis is not a problem of a single country, but one that affects all of Europe and brought about a change of awareness in society by restoring empathy. Please share some of the strategic elements that led to the campaign’s success.

Mike Wilk: The core-element is, was and always will be empathy. We constructed everything around a feeling. A re-created feeling transported by a ship of white people. But how to do it? With 100% authenticity. We knew upfront: the first glimpse of “Oh, that’s cheesy” or “Well, I don’t buy this setup” would trigger the opposite of what we wanted to achieve. This was not a roleplay, rather a simulation. Further strategic elements on how the campaign got rolled out with a longformat documentation, a microsite and certain activities played along our core idea: a real, intense stunt that captures people’s attention.

AME Awards: What was SeaWatch’s’s reaction to the results of the campaign? What results were you most proud of and why?

Mike Wilk: SeaWatch was overwhelmed by the first-hand media feedback. After month of silence our stunt really brought back attention to the rescue-organisation. Money regarding creating donations was – somehow – never an issue with Seawatch... so, for them it was really about the measurable media-impact. Together with our client we were happy about two things: the positive national AND international feedback to the action itself on the one hand side. On the other hand: the long-lasting quotable action. Month after execution the experiment media-channels are still picking up the issue cause the initial created feeling is a timeless fact given on any escape.

AME Awards: “LIFEBOAT - The Experiment” was honored with the AME Gold Award, what does this accomplishment mean to you, the team, and the client?

Mike Wilk: That is an incredible achievement. We are so proud and honored about this accomplishment. We see people ongoingly interacting with our campaign, people re-acting to LIFEBOAT – THE EXPERIMENT. To convince people to have a new yet ungiven angle on the refugee-escape moves us still pretty intense.

AME Awards: What is next for your client SeaWatch?

Mike Wilk: You are right, the trouble is not over yet. LIFEBOAT was one option to draw attention to the refugee-cause. We developed a next idea for SeaWatch mid-March. Unfortunately, the execution involved a gathering of people/a crowd. Due to all the COVID-19 restrictions this execution is parked at the moment. In the meantime, we are updating ourselves on a regular basis.

Caio Barsotti is President of CENP Brazil. He brings years of experience to his role as AME Advisory Council member having worked at numerous Brazilian agencies such as Salles, Almap and DPZ, and in v..

The AME Awards honors campaigns that hit the bullseye for brands, triumphing in both creativity and effectiveness. AME's powerhouse Grand Jury are repected industry pro's known for their contr..

AME recruits advertising and marketing thought-leaders from around the globe to select results-driven effective campaigns that move the needle on behalf of the brand. The 2021 Grand Jury of  glob..